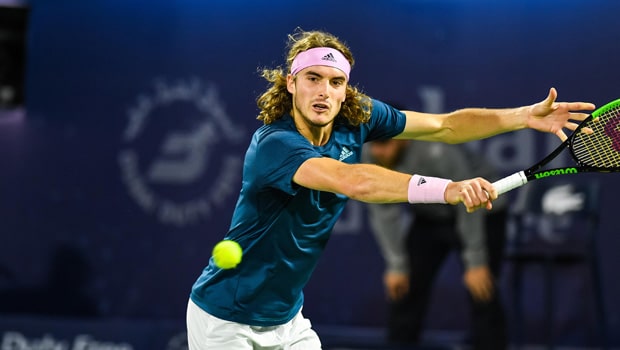 Greek tennis star Stefanos Tsitsipas is currently on fire after winning the Monte Carlo Masters recently and scripted history by becoming the first Greek to achieve that feat. The World No 5. will now head to Spain and feature in the Barcelona Open.

While he is in great rhythm right now and will be aiming to win the Barcelona Open as well, Rafael Nadal will be his biggest threat. The Spaniard has won the event at Barcelona for a record 11 times.

The 22-year-old spoke about the Spaniard, playing in Barcelona and much more at his press conference. Tsitsipas’ consistency on clay has made him one of the best players from this new generation. He has a reputation for doing well on clay and Spanish clay is probably the best surface hence the confidence is pretty high for the Greek.

“I have only played three times here, but I have the feeling that there have been many more. We have a great draw, and it will be interesting for me to see where I can go. I want to continue scoring points in the coming weeks,” Tsitsipas said.

The 22-year-old faced Nadal in 2018 in Barcelona and ended up losing that final. But he admits that he learned a lot that day. “I remember that the first time we played was precisely at Godó, in the final of 2018. It is true that I lost, but I learned a lot from the defeat. It is incredible that he has won 11 times here. I am satisfied with half of his titles,” the World No. 5 added.

Lastly, when quizzed whether Tsitsipas sees himself winning a Grand Slam this year or not, he said that he sees a lot of possibilities. “I see myself with possibilities, but one thing is to think about it and the other to do it. I used to see Nadal, Federer, and Djokovic play as a child in the big tournaments, and now I’m playing the games against them,” he signed off.

The Greek will start his Barcelona Open campaign against local player Jaume Munar.