Home » Tennis » Italian youngster Lorenzo Musetti vows to do his best in his first meeting against World No. 1 Novak Djokovic

Italian youngster Lorenzo Musetti vows to do his best in his first meeting against World No. 1 Novak Djokovic 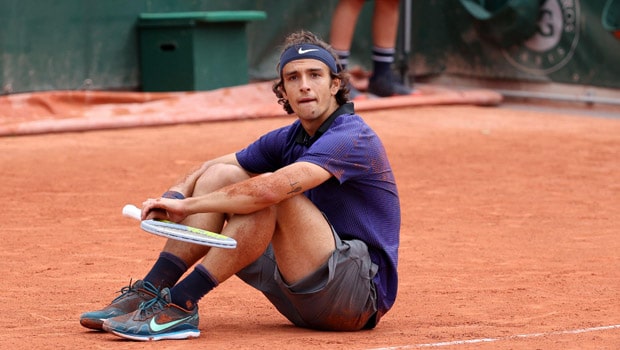 World No 1 Novak Djokovic has been in excellent form in the Roland Garros. The Serbian star is yet to drop a set en route to the fourth round. He will now play Italian youngster Lorenzo Musetti who has been in the main draw of the Grand Slam for the first time in his career.

Musetti recently defeated compatriot Marco Cecchinato in a 5 set thriller and will now play Djokovic for the first time in his career. Musetti won 3-6, 6-4, 6-3, 3-6, 6-3 against Cecchinato and can be the underdog story of this Grand Slam.

However, after his win, Musetti was more excited to set up a date with Djokovic. He told the media that it is a dream come true for him to play the World No.1 with whom he has spent a lot of time practicing in recent weeks.

“We know each other a little bit,” Musetti said. “[We] never played [a match] and it’s going to be the first time, [which is big], especially in a Grand Slam.

“So for sure there is going to be a little bit of tension, but I think that is what I’ve been working for since my childhood. All the sacrifice and hard work I did in my childhood became reality now. So I’m just enjoying the moment and I will try to do my best,” the Italian youngster continued.

Although he will be up against the top ranked tennis player in the world, Musetti sounded very confident. He claimed that he wants to take heart from the win against Cecchinato and replicate that against Djokovic.

“I have a lot of feelings right now, and I’m not thinking about the match,” said Musetti. “I [will] try to enjoy the win of today a bit, and then tomorrow I will focus on trying to beat Novak and try to go forward.”

Djokovic on the other hand has had a smooth ride till now as he recently defeated Ricardas Berankis. But the Serb is wary of the threat that Musetti possesses.

“I know very much so that he is a big challenge to me,” Novak Djokovic said. “So there is no question I have to go out playing on a high level, because, you know, he will not have much to lose. I’m sure he’s gonna come out and really try to play tennis of his life playing on one of the two big courts.”